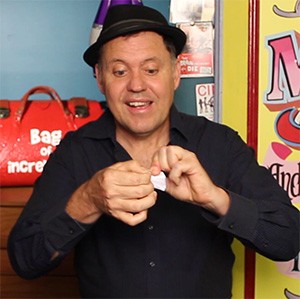 The coin fold magic trick first appeared in Jean Hugard’s book “Close Up Magic”, published in 1938. This magic trick has been around for a while. You will see this trick appear in many beginners’ magic books and so many people have read how to do it and watched videos of this trick, however, you barely ever see any magician do it.

This sets you up for scrutiny as the audience back tracks your moves and work out where the money has ended up. The fact that it’s so easy to get busted is the main reason you don’t see this the coin fold trick very often.

To help spice up the coin fold magic trick, I birthed the idea that the money is just the admission payment for another magic trick. There is no sign that the money will even be a part of the magic trick; it just happens to vanish and reappearing as a part of making an EFT payment.

It’s a good example of creating a script for your magic tricks that guides your actions throughout your trick and gives you a little more sense to your trick.