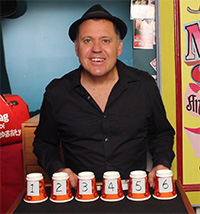 This simple dice trick is perfect for any starting magician. The trick removes a lot of the complications that trouble beginners.

Most magicians have to face the problem of finding the confidence to perform in front of people they don’t know. This dilemma was recently brought up on my Facebook page. I was saying how I find my family the toughest critics when it comes to performing tricks. This prompted people to respond saying that they find their families the easiest audience to perform in front of and that strangers are much more difficult to impress.

Turning a Trick into a Game:

I found that turning a magic trick into a simple game helped me gain a lot of confidence when performing in front of complete strangers. This was successful for two reasons.

So in this simple dice trick we turn a dice force into a mini sideshow game where the participant has a chance to win a prize. You will have control over the outcome the whole time. When your participant discovers they haven’t won a prize, you reveal the twist. The game ends happily when you give the participant the choice of whatever prize they want.

For this dice trick you will need two of the same dice and a large matchbox. The tray needs to be big enough that the dice can rattle around in the tray, but not too large that you can easily see the inside of the box. This is explained in the video tutorial accompanied with this article.

You will also need six cups or six small boxes and six prizes that can fit under your cups or boxes. Make sure that the prizes aren’t too expensive as you will be giving away one of the prizes at the end of the game.

It is important that you offer a prize at the end of this dice trick. It will soften the sting of losing the game and it will paint you in a good light. If you leave a crowd sour at the end of a trick, you make it harder for magicians who come after you. So remember to always add a positive spin to tricks such as this.

This simple dice trick is great to perform at a fete or carnival. It builds your confidence as you are repeating the same trick and performance over and over again. You will improve very fast the more you perform this dice trick.