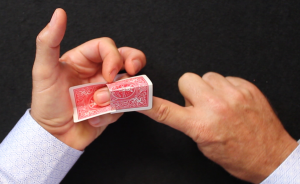 This same reason applies to large illusions used in stage magic shows as it does to compact illusions like this finger illusion trick. When you watch a flashy stage illusion there is a reason why they are flashy and fast moving; it detracts from the method becoming obvious over time.

Luckily for this magic finger illusion trick, you only need your hands and a playing card. If you don’t have a playing card you can use a piece of cardboard. I have found that cutting up breakfast cereal boxes works well for this.

You don’t even need to make precise cuts. Simply tearing the cardboard is enough to be able to create an impromptu illusion.

If you are unsure of the dimensions of the cuts I have included a download sheet that shows the very same card I used in the video. You can copy that directly if you like.

The finger illusion trick is a quick fun mini illusion that provides a visual break from your other magic tricks. Remember, don’t overdo it. Less is MORE.

I saw this version of the same trick done with playing cards at a Lee Asher lecture. He has contacted me saying it is his published manuscript called the ‘Finger Box of Death’. Click here and check out Lee’s full range …