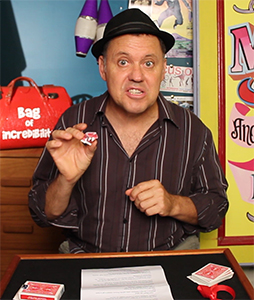 Although the frog prince magic trick is visually amazing, it is hard to do. You’ll find that most of Michael Close’s material involves some heavy moves and if anyone can teach you these moves, he can.  He also uses the memorized deck quite a lot.

I have stripped down Close’s version and streamlined his magic trick into an easier and fun version of the classic trick. These alterations do result in a loss of impact that the original contained, but the purpose is to get you comfortable in front of audiences with cards. 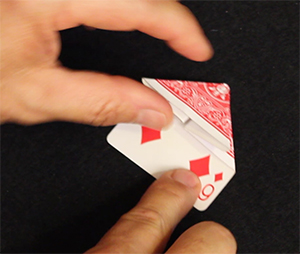 “I feel it still punches well above its weight when it comes to impact.”

This trick requires you to be able to switch one card for another right under the nose of the unsuspecting spectator. If you are able to confidently perform a smooth double lift or a top change then you should be ready to go. If you are not able to do these, you can always use The Sneaky Card Sleight from Magic Lessons #34 and you will be able to perform this trick in no time. The main selling point when it comes to this trick is the story that accompanies it. If you like the one I used in the video then you can read it here or download it below, if not, feel free to make up your own story to go along with it.

Annabella was a princess. who lived in a very big house in the right street. Anyway she was sitting next to Mum and Dad’s lap pool, in tears, because her mother, the Queen, had dared question the huge phone bill she had racked up. Then the her iphone rings – “What now!” Princess Annabella moaned – and as she is trying to get it out of her skin tight jeans it slips from her hand – plop! – straight into the lap pool. Then it was more tears at the thought of losing those 500 free texts.

“May I be of assistance, my lady?” a voice called from the bushes. Confused Annabella looked around but couldn’t see anyone.

“… who’s there?” she asked Whoever it was had a handsome voice, and the Princess wanted to get to know him. Then this frog jumps out from the bushes. “Please, don’t be alarmed,” the frog said. A talking frog??!

“I am truly a Prince, my lady – but an evil witch I met on a dating website turned me into a frog . It is only the kiss of a Princess that can return me to my natural form.”

Annabella was about to call security when she remembered the old tales she had heard and knew that all Frog Princes were remarkably dashing once they returned to their human form. Well the frog fancied his chances so he said…

“Allow me to retrieve your phone my lady! And the frog leapt into the water – which was a bad move – because it had become electrified from her phone. The frog floated up twitching.

Even though Annabella knew his brain might be scrambled she did the right thing and kissed the frog.

And right then and there that common little 2 clubs frog turned into a handsome prince. So there’s two morals to this story: Think before jumping in headfirst. And Be careful of electrical equipment around water.

To download the Frog Prince Magic Trick Story, check below.