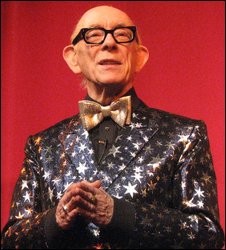 In this week’s History of Magic, Ali Bongo takes the spotlight. Britain has produced many comedy magicians over the years because English humour tends to be acceptable around the world. One extremely funny magician, although perhaps a little crazy in appearance but nevertheless a very witty performer, was Ali Bongo. He had a unique zany style when he used to perform magic. It was colourful, unpredictable, and hilariously funny.

Named William, Oliver Wallace by his parents, Ali Bongo was born in Bangalore, India on December 8th 1929. His father with the same name was stationed with the Queen’s own Royal West Kent Army Regiment, on a British army station in Trimulgherry in Secunderabad, so Tamil was his Ali’s first language. Ali Bongo moved to England when aged 7 and settled in Sutton Valance, Kent. He earned a scholarship at the Sutton Valence School where he formed a magic club, but he left school when he turned 16 to pursue a career as an entertainer. By the age of 17, he was already performing semi-professionally.

Ali was drawn to the theatre and performed and even helped write a pantomime for a youth club he formed in his teens. It was this early association with the stage that led him to start learning magic. During his National Service, he began to perform for fellow servicemen, and after he left the service, he began a broader study of magic.

As a young man, Ali obtained a job with Harry Stanley’s Unique Magic Studio at 14 Frith Street, London. This was an ideal place to learn the basics of the art of magic, under the tutelage of Harry Stanley himself. Magicians around the world had high regard for Harry and considered him a very reputable magic dealer. It was at the Unique Studio that Ali Bongo as a demonstrator developed many of the skills necessary for his career. After his Unique Experience, he obtained a job with Hamley’s of Regent Street as manager of their magic department. Hamley’s was the oldest and largest toy store in the world then. Here was where Ali further developed his skill by daily demonstrating the large range of magic Hamley’s stocked. For any magician, demonstrating magic is one of the best ways to learn the craft as it is a real hands-on approach.

Ali Bongo used a number of catchphrases when performing such as, “Aldy Bority Phostico Formio – Uju Buju Suck another Juju – Hocus Pocus fish bones will choke us – My name is Ali Bongo and I come from Pongo, Pong-Tiddley Pongo Land”—weird phrases by an even weirder performer. He made his television debut in The Good Old Days show with English comedian Tommy Trinder. He created the act and persona “The Shreik of Araby”, a character dressed in black tights and long, silver, oversized curled toe slippers. He wore multi-coloured tops with an exotic turban with a white ostrich feather on top and a funny pair of dark-framed glasses. It was this act and this dress mode that made him famous around the world, which were all carefully choreographed to the music of ‘In a Persian Market’ and performed in an Arabian Nights-painted stage background. He performed at a furious pace that took enormous energy, and it became one of the fastest solo-paced magic acts ever seen.

During his successful career, he was a member of the prestigious London Magic Circle and was twice elected president of this august organisation. When it became time for the committee to select a new president, there was some concern at his suitability because he was such a bizarre character. But Ali Bongo fitted the bill admirably and became the unofficial British ambassador for magic. With his stage experience and knowledge of magic in all its aspects, he became the ideal choice. Bongo wrote a number of books on magic that

Included some of his own creations and inventions. He became a consultant for ballets, plays, operas, and different theatre productions. He then joined David Nixon as technical advisor and consultant for his television series, David Nixon Magic Box and David Nixon Magic Show. He was often called upon to advise and mentor non-magical stage performers who wanted to include illusion or magic into their acts. Ali Bongo signed with Paul Daniels in 1979 as technical consultant for Paul’s highly successful BBC television series, The Paul Daniels Show, which ran until 1994. Ali supplied many of his own routines and magical inventions for Paul’s shows. 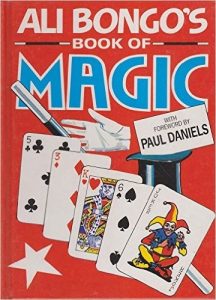 Ali’s act began always with the “In a Persian Market” music. He literally bounced on stage then produced a tall coloured paper tree from a rolled-up tube. Next came a series of appearing then vanishing silks and coloured ribbons, all done while jumping around the stage. Placing a silk hanky into his hand he would shoot his hand repeatedly then display the hanky full of holes. Along with the zany silk productions, there is a standard 20th Century Silk that ended up with a pair of ladies’ pink panties tied between them. While all this mad, colourful magic was going on, he displayed a blooming pot plant that changed colour, and upon pulling the plant from the pot, he exposed a giant carrot. There were also comical sight gags and a comedy balloon penetration through a tube pierced with swords. He used the old Square to Circle where his face was framed for a laugh. The frantic pace continued to his finale, the vanishing bottle. The bottle was covered with a tube and Ali goes through all sorts of antics to try and get the bottle to vanish unsuccessfully. Finally he would remove the bottle only to produce yards and yards of silk hankies, coloured ribbons, flags, and still the production went on. Eventually there was a surprise production of another bottle at the end. He then would march off the stage with the Union Jack Flag on a staff over his shoulder to the strains of Rule Britannia.

While his magic did not use expensive magic props, what he used was done with flair and comedy, turning standard magic tricks into truly funny routines. His act was like no other and I doubt whether there is a magician alive today who could duplicate his crazy performance and wit. He worked mostly silent without patter, making his humour visual. I had the privilege of seeing Ali Bongo perform at FISM in Lausanne, Switzerland in 1991 where he was a guest artiste. During the show, he performed his Pom Pom Stick routine with a very humorous presentation. I was so fascinated that I left the auditorium immediately when he had finished, rushed to Korari’s dealer stand, and purchased the last set of Pom Pom Sticks he had. Needless to say, I never had any success with this otherwise lovely trick. This just goes to show we can’t all emulate other performers we see. Ali Bongo was a one-of-a-kind magician whose knowledge was highly sought after. He made a strong contribution to the Magic Circle and it is known that he left a large welfare fund to help struggling performers.

While Ali was lecturing in Paris in 2009 (he spoke fluent French), he fell ill. While hospitalised, he suffered a stroke and passed away on March 8th that year. His entire magic collection and extensive magic library were bequeathed to the Magic Circle. Ali Bongo remains a much-loved magician in the history of magic and he will always be remembered with affection by those passionate in our craft.