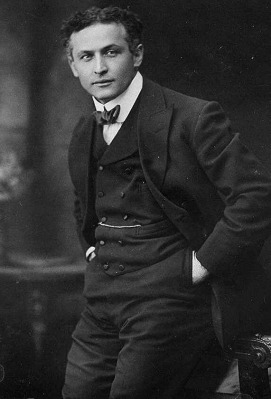 Harry Houdini started his career early… at the age of 12! Following in the footsteps of the magician who inspired him, Robert-Houdin, Harry Houdini was born “Erich Weiss” he changed his name and decided to start life on the road.

He was short, but very athletic. It wasn’t long before he found his calling on stage and married his wife Bess at the age of 19. Together, they performed to amazed audiences with lightning-fast tricks, such as changing places between a locked truck and cabinet while tied up.
This lightening fast illusion is still performed today; Houdini called it the Metamorphosis however it is also called the substitution trunk.

People were astounded. Who was this man? How did he pull it off?
The answer was not by accident and involved a lot of intense study.

Here is a video of the Pendragons performing the spectacular quick change metamorphosis illusion invented by the master himself.

A Pioneer of “Escapist” Entertainment

Audiences wanted to be transported to a world of mystery. Houdini knew this, and began to steer his act more towards escaping from difficult situations. Houdini was restless, and often took risks in his career. He spent a year in theatre Vaudeville alongside other performers before striking out for London.

No one knew his name, but after a stunt where he enlisted the help of Scotland Yard to lock him to a street pole and quickly freed himself, a contract materialised.
One year later, he was the biggest stage attraction in all of Europe! 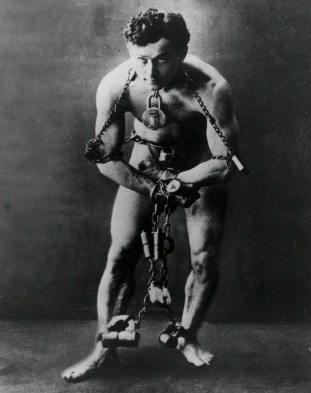 Escapology – The “Science” of Escape

Other stunts soon followed, and Houdini wrote all his own promotions. A believer in word of mouth, he staged countless “escape-acts” in public; hanging from straightjackets from buildings, locked inside safes, tied to chairs or various other objects, often in handcuffs or heavy manacles. This gave him the perfect opportunity to show off his enormous mechanical skills.

Houdini worked tirelessly to understand how all locks worked. There was no “hocus pocus” with Houdini. He often imparted that his skills were learned, and touted himself as being so knowledgeable that there was no cage, rope, or lock that he could not figure out.

Whether it was being locked inside a Russian prison van, or being tied to a windmill sail in the Netherlands, no one ever accused him of not being creative or being shy of drawing attention. This came in especially handy when he upped the ante with underwater stunts, locking himself inside a crate weighed down with 200 pounds of lead and thrown into a river!

Escapology took off because Houdini used his mind to figure out how to scientifically advance his escapes into thrilling art.

Quick-Change of the Times

In addition to the many dangerous avenues that escapology presented, Harry Houdini sought to set himself apart as a man of his times. He was always willing to explore new technology. In 1910, he became one of the first men to fly a plane in Australia. Not many would dare set foot in such experimental machines back then! He also starred in several silent films showcasing his exploits, eventually founding his own film company.

But one of his more surprising career turns occurred when he took a year off in World War I to educate American troops on the subject of how to escape from handcuffs. Harry Houdini may have been a master performer, but his contributions during this difficult era allowed him to be patriotic as well.

A Cult Following, But Not “Occult”

In spite of the fact that he was once buried alive, there was never anything about Houdini’s act that embraced the supernatural. Houdini was notorious for his hatred of charlatans, mediums, and frauds that used tricks to deceive and cheat innocent people. Houdini invited the help of the police and reporters to uncover these people, who he viewed as undeserving. Houdini was never dishonest about using his intelligence to create wonderful stage performance, and not unseen forces.

Contrary to popular belief, Houdini did not die during his infamous “Chinese water torture” trick, where he hung suspended upside-down in a water filled glass tank, freeing himself from restraints. The truth of his death was a mix of appendicitis and an unfortunate blow to the stomach. The fact that Houdini died on Halloween was a coincidence. In spite of his success, he was obsessed about perfecting his act and being forgotten. But no one can forget in the entire history of magic someone with such dedication and myriad interests as Houdini.