The Magic of Haruo Shimada

From time to time, we find magicians who are in fact creating magical history right now, in the present. 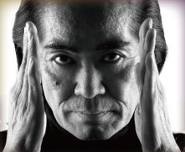 One such performer is the wonderful Japanese magician Haruo Shimada. Shimada was born in Tokyo in 1940. At an early age, he saw a ‘Tenyo” counter in a local department store that so fascinated him that he went back day after day to try and learn the secrets of Tenyo magic. He studied earnestly and practiced long and hard then eventually obtained a job with Tenyo demonstrating their range of magic tricks. It was the simple thumb tip that inspired him. After giving his first performance at age 18, Shimada went on to become one of the most successful performers of all time in the history of magic. Shimada has become known as the consummate, elegant classical performer. Throughout his magical career he has never spoken on stage and presents a dramatic silent act. With his compelling eyes, it is as though the audience were under some hypnotic spell watching him.

The Evolution of Haruo Shimida:

The early years for Haruo Shimada were difficult with little money in the family and there were no magic books available, as it was shortly after the Second World War and a general shortage of all resources. Working for Tenyo, he spent his days travelling from the different Tenyo counters demonstrating their magic tricks, then returning home at night practicing sleight of hand late into the night. Tenyo himself was an illusionist but Shimada had a yearning to perform sleight of hand and manipulation, so his teacher Tenyo suggested he take lessons from Tenkai who had just returned to Japan after spending 30 years in America and was a specialist in sleight of hand. In 1958 learning from Tenkai inspired in Shimada the desire to eventually go to America where he felt there would be more scope as a performer.

His early act featured billiard balls and card manipulation that led to many Japanese T.V. appearances and made a command performance for former Emperor Hirohito and family. Soon thereafter he became inspired after watching Channing Pollock a classic dove magician in a film titled ‘European Nights’ and thereafter began to develop his own dove act that became quite unique and successful. Despite his skill with manipulation, he constantly sought ideas that would lead to bigger and better things. In 1964 he left Japan to tour Mexico and Australia where he 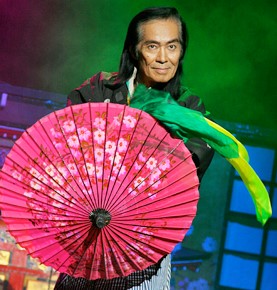 met his wife Deanna whom he married in 1965 and incorporated her into his act. It was a marriage of convenience that enabled Shimada to remain and perform in Australia. With Deanna as his stage assistant they began a successful Australian tour for the next few years. They relocated to the United States in 1970 and in addition to his dove act; he premiered his act in traditional Japanese wardrobe and costume with the production of several large coloured parasols and large oriental fans.

As Shimada’s act gained further popularity, he decided to add the art of stage illusion and theatre to his repertoire, so that in 1975 he introduced his extravagant Dragon Act. In this scenario he battles with a 60 foot fire breathing dragon against a traditional Japanese Kabuki Theatre background. It had become time to bring real Japanese theatre to the masses.

A good lesson to be learnt from Haruo Shimada’s approach, is to constantly search for further ideas and concepts in one’s magic to stay at the top and to be in demand.

Like his dove act, his new performances proved highly successful in Las Vegas, Paris, and London and on the world’s largest stages. He became sought after as a class magic act.

As Shimada’s career grew and to satisfy repeat bookers he had always worn traditional western-style costumes but later altered his appearance with more Eastern styled costumes and backdrops. It was subtleties like this that influenced agents to re-book his act again and again. Another lesson for success was his innovation. Shimada performed his dove act in 1982 to open Liberace’s show at the Las Vegas Hilton for five years. He then became the guest star at the famous Riviera’s “Splash Show Revue”.  His dove act was different yet compelling to watch, as his feathered assistants made their almost impossible appearance and became pure theatre. It has been said that his particular dove act is flawless and his steals unbelievable. To watch Haruo Shimada perform was to be drawn under his mystic spell as he silently performed his beautiful dove productions. He could produce up to 10 doves in his act and expanded his twin dove production by producing 4 doves on his cane. 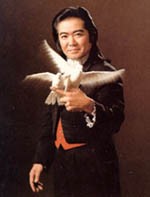 For much of his career misfortune seemed to dog Shimada, yet with his determination and perseverance he overcame the obstacles on his road to success. He became the very first Japanese entertainer to star in a Las Vegas Production Show for an extended multiple year contract. He appeared numerous times on the Johnny Carson Show, Merv Griffin, Dick Cavett and with Bill Cosby. Shimada has performed on most of the prestigious theatre stages around the world and most of the show lounges in America. He has been awarded many citations and prestigious awards for his outstanding contribution to the art of magic.

His daughter, Luna Shimada continues the family tradition with her own dove act around the world. Haruo Shimada, although now in retirement, is constantly sought after as a guest at conventions. He has become a living icon and is regarded as a history-in-the-making in the world of magic.