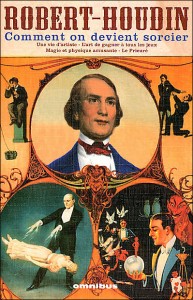 Robert Houdin spent his childhood surrounded by clocks – his father was a clockmaker. For someone who would want to create impossible to explain mechanisms, this was quite an advantage! As a child, he was able to produce visionary mechanisms, like a clock with a glass dial and no visible gears. After getting a book of ‘scientific amusements’ (i.e. early magic tricks) by accident instead of a book on clocks, it seems destiny had a hand in his fate.
And amuse people he did. Robert Houdin made seeming miracles at a time when most people had never seen a train or heard of electricity. Today we have robot toys, but imagine making toys yourself with just the knowledge of clock gears and springs. Not having the option of buying such things, Robert Houdin would just invent whatever popped into his head, including a metal peacock that could spread its wings and a machine that could write and draw by itself. Crowds went wild for such automatic exhibits. Such marvels were new to a world just discovering the mysteries of science.

Robert Houdin was thought of as the “Father of Modern Magic” but every magician starts out on the bottom. His first theater performance was so bad he nearly gave up and called it quits. Luckily, a friend of his called his tricks silly and this made him decide to shoot for true greatness. All of France was grateful. He soon became the wonder of his time. And he dressed in a formal black top hat and coattails. Sound familiar? Wherever Robert Houdin took his act, other magicians were sure to follow! Let this be a lesson: confidence attracts. 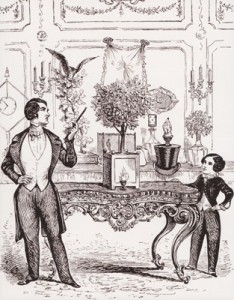 Screen-Power of a Father & Son Duo

Eventually, Robert Houdin had a son and brought him into the act. The boy would be blindfolded and be able to tell an audience what object people had brought with them. Robert-Houdin lifted spirits in the audience…not to mention his son via levitation! But the screen act took Paris aback. Robert-Houdin and son would draw objects and then materialize them from behind a small screen, far more than they could possibly hide! In this act, magic was all relative.

Ahead of His Time (and the Police!)

Robert Houdin worked his wonders at a time when many were afraid of such things. Many accused him of witchcraft; he had to tell his secrets to authorities so he wouldn’t be put in jail for it! And the way he was able to buy his own theater? By helping a rich man find a thief. After taking apart a desk and rigging it with a way to mark the thief, the culprit was soon found. The rich man gratefully gave him money for a theater. Later, Robert-Houdin would become one of the first people to have a house running on electricity. He created his own version of light bulbs (before Edison!), made an automatic horse feeder, and even his own thermostat. The people in his neighborhood must have thought him to be a true wizard, but in reality he was an inventor who was far ahead of his time.

A Most Selfless Magic Act (of Heroism)

Duty. Honor. Patriot. Are these words you commonly think of when someone mentions magicians? Well you should. Robert Houdin was the magician who stopped a war! After his retirement, the French government invited him to Algeria for a top secret mission. At the time, a bunch of local magicians were claiming to be divine, and wanted to start a war with France. Robert-Houdin performed in front of a shocked audience. Using electromagnets in a trunk, he made them think he could steal the strength from their strongest men! He then performed a gun trick, catching a bullet with an apple. This trick had killed magicians in the past. Robert-Houdin risked his life to impress and left his last audience a true hero. The local magicians were humiliated and the two nations health and prosperity were allowed to reappear – as surely as the giant-sized flower bouquet Robert-Houdin had once produced for Queen Victoria.

Robert Houdin shaped the history and art of magic as he gave the entire profession of stage magic no choice but to follow in his footsteps. There seems to be a time and a place for every invention. But whereas others wanted to produce products, he wanted to produce the thrill of the unknown and elegant beauty.