The Magic of Penn and Teller

Two of the biggest names in magic today are those of Penn Jillette & Teller, colloquially just known as Penn & Teller who first performed together on August 19th 1975. Today they have their own stage show in Las Vegas and have become well-known for their famous “Fool Us” television series that has captivated millions of viewers worldwide. Penn, Fraser Jillette was born on March 5th 1955 in Massachusetts USA and began his career as a juggler. Raymond Joseph Teller was born on February 14th 1948 in Philadelphia but later changed his name to the ‘mononym’ (single name) of ‘Teller’, by deed poll like pop star Madonna did. While Penn plays the major speaking or oratory role in the duo’s performances, Teller communicates by mime and silent mannerisms. Both highly skilled in numerous disciplines, Penn and Teller are carving a name for themselves in the history of magic as they explore and create new directions in the art of magic. Their innovation and thinking outside the box help keep magic alive.

While their respective skills and talents have become legendary and through their expertise and generosity they have promoted dozens of magicians into full time careers, they are no strangers to controversy and adverse commentary. Both performers are self- confessed atheists, teetotallers, noted authors, sceptics, film directors / producers and seem to thrive on controversy. They have been known to expose the secrets of magic and have raised the ire and at times anger of high ranking television hosts and public figures. However through all this they still manage to entertain and amaze their audiences with often gory magic tricks, frightening illusions, and the macabre. They seldom mix socially and part of the duo’s career success is due to their respect for each other’s drastically different lifestyles, interests and business ethics but they have a unique rapport when working together.

Penn and Teller are arguably two of the most knowledgeable magicians alive today, as witnessed by their popular Fool Us programme where they challenge fellow performers to present exceptional magic tricks to see whether the couple can work out the modus operandi. Their own performances on Fool Us really does literally fool their watching audiences that can be dramatic presentations, with 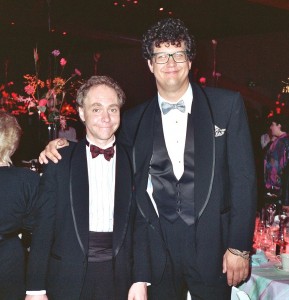 elements of real danger to simple effects using playing cards, sleight of hand or dangerous illusions. Their own presentation using a high powered pneumatic nail gun is positively scary. They have brought a new concept when presenting the famous ‘Bullet Catching Trick’. In Penn and Tellers updated presentation both performers fire a marked bullet through a sheet of glass at each other with both catching their partner’s respective bullets in their mouth. Their bullet catch has lifted this dangerous yet spectacular Illusion to new heights and the inherent dangers.

One famous magic trick for centuries is the legendary “Cups and Balls” where small balls appear and disappear under three opaque metal cups. While this is bewildering enough and requires great skill in sleight of hand, Penn and Teller perform the trick using clear glass cups which is even more confusing and amazing to onlookers. They have lifted this effect into the 21st century in a novel and mystifying way, because you can see (or think you can see) how the trick is done. It is an amazing phenomena to watch it being performed.

It is rumoured that in 1989 the comical duo buried a ‘Time Capsule’ beneath the concrete in the vicinity of a famous Chicago restaurant before it was demolished but no one has ever discovered the capsule or know where it is actually located. Perhaps it is Penn and Tellers way of intriguing their fans, or is it just another publicity stunt because all publicity is good.

Throughout the 1990’s Penn and Teller have appeared on all the major television interview shows gaining often critical reviews. They have toured successfully and performed on & off Broadway and now perform six nights a week at the Las Vegas Rio Hotel Casino.  On their national syndicated TV show “Bull —–t” the duo took a highly sceptical look into psychics, religion, conspiracy theories, pseudo-science, the paranormal, gun control in the USA, astrology, Feng Shui, environmental issues etc. often raising objection and controversy. Both have authored a number of books on magic, with titles like, ‘How to Play in Traffic’ and ‘Cruel Tricks for Dear Friends’ and ‘How to Play with your Food”.  Very weird titles indeed.

Sometimes Penn and Teller will claim to reveal a secret of how a magic trick is done, but these tricks are usually invented by the couple for the sole purpose of exposing them and therefore designed with a more spectacular and weird method than would have been necessary had it been just a regular magic trick. For example during their NBC “Off the Deep End”, special that involved an escape act  where Teller was placed inside a wooden trunk that was then placed into shark infested waters. The live audience was shown how Teller escaped the trunk through a trap door in the bottom before it was placed in the water. Once outside he then sat reading a magazine while the drama and tension on screen unfolded. I still remember when in one of their first television series shows they disclosed the thumb tip with each member of the audience being given one and shown how to use it.

What lessons do the performances of Penn and Teller bring to aspiring magicians and would be illusionists? For me it is their sheer natural show business talent in discovering new ways to mystify, and entertain their growing audiences.

They are refreshingly different and have learnt to present their showmanship in a vibrant and different way to thrill and enthral. They play with dangerous stunts, with little fear in themselves, yet manage to transfer that fear to their watching spectators. They are compelling performers to watch.

The double act of Pen and Teller is often unconventional and while they may not appear as close friends, as do many others in show business partnerships do, like Dean Martin and Jerry Lewis or Lennon and McCartney, they however have the greatest of respect for each other. Teller remains Penn’s best friend yet when there are business differences these very often lead to far better artistic decisions being discovered. Both performers are highly regarded within the magic fraternity and they continue to create magical history as they continue to work together. They have received numerous accolades and awards and both have celebrity stars on Hollywood’s Walk of Fame just down the road from the Magic Castle.  Penn and Teller will continue to thrill and entertain their audiences because of their great versatility and creativity and by bringing often lesser known performers into the limelight and onto the big stage to present their magic to the millions. Of all the performing arts, I believe that magic more than any other art from like dance, pantomime; drama etc. brings more to our stages because it is constantly evolving.  As we look back at the early pioneers of magic over centuries, the art of magic continues to draw the crowds because it is such a vital art form. Penn and Teller, both brilliant and creative magicians, will undoubtedly become very much part of the rich history of magic.