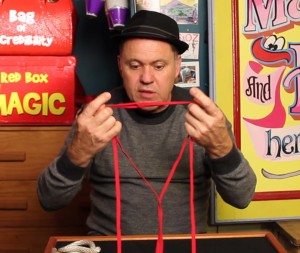 The linking shoelace trick is an easy rope trick that can be done with your shoelaces if you lack any other useable rope, cord or string on hand. These type of tricks are great for the simple fact that they are impromptu and are always available if you are wanting to perform a small miracle at anytime unless of course you are wearing sandals.

I use an important magic technique that I like to call ‘mirroring’ throughout this video. You will see before I do the secret move under the cover, I show how the ropes can only be threaded through each other and I grip the ropes in a similar position to how they will be held at the end of the magic trick. This reinforces (subconsciously in the spectator’s mind) that if they witnessed the ropes looking this way they could have only arrived at this point by being threaded through each other because they saw it with their own eyes. This is subtle but techniques such as these can be integral in selling a trick such as the Linking Shoelace Trick to your crowd. 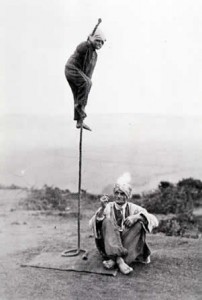 History of the Rope Trick:

The Indian Rope Trick is arguably one of the most well known rope tricks of all time, many people want to know if it even happened. The simple answer is no, it was a hoax. This was stage magic rumored to have been performed in and around India during the 19th century. Many people have described this magic trick as “the world’s greatest illusion”; it apparently included a length of rope, one or more assistants and the magician.

Varying accounts of the rope trick have appeared since the original was published in 1890, yet the trick remains essentially the same. Three basic variants have appeared which vary the theatricality displayed by the magician and his helper.

The simplest version includes the magician throwing a rope high into the air. The rope would erect with no external support. His assistant, Jamoora, would then scale the rope and then descend. A version with more complexity would include the magician or his helper disappearing after climbing to the apex of the rope and then reappearing at ground level.

However the “classic” version was much more complex and detailed: the rope would appear to rise high into the skies. The assistant would scale the rope and disappear into the view. The magician would then summon his assistant and upon getting no response become enraged. The magician would then equip a knife or a sword and climb the rope, he to would vanish. An argument could be audibly overheard and then limbs would then drop, presumably belonging to the magician’s assistant. When all of the body, including the torso, landed on the ground, the magician would descend from the rope. He would then collect all the limbs and calmly place them in a basket or place them in one place and cover them with a cape or blank. The boy would then reappear, totally restored.