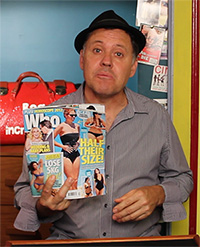 How the Magazine Prediction Trick Works:

First you will hand them the magazine and a marker pen and the ask them to hold the magazine behind their back while they turn through the pagers and stop on a page of their choosing. They then mark the page they stopped on with a cross. They then give you back the pen and close the magazine back up.

You have the untouched envelope on the table while the magazine is being marked. The envelope contains a piece of paper with a word written clearly across it. The audience can check the paper and envelope and they will only be able to find the one word.

Then you ask the audience member to find the marked page in the magazine that they had behind their back. They will find the cross over one word, and if they look closely, they can see that it was the same word that was pre-written in the envelope.

The Key is in the Prop:

The magazine prediction trick definitely fits into the easy mentalism trick category. This relies on a special pre-made prop. The prop will take about a day to make but it only requires 5 seconds of effort and a days worth of patience.

While recording the video, I had to play the part of the audience 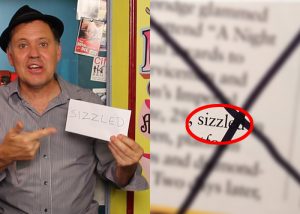 member but remember to be aware that the audience member is allowed to retain control of the magazine the whole time. They mark it, they hold it, they flip through it to find the chosen word. This adds to the strength to the mentalism effect if the audience member is in control the whole time. I was only doing it all in the video because no one could assist me in making the of the tutorial.

You have to be Joking:

By using a magazine rather than a book you open yourself up to more opportunities to joke with the audience about the contents of the magazine. By including your audience’s interests in your magic routines is a good way to improve your chances of getting re-booked again.