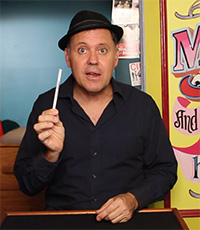 The magic pen trick applies the paddle move that you have learnt in previous videos to create a simple trick that you can perform anytime you see anyone with a pen.

You will need to make sure you find a pen that contains writing on one side and is blank on the opposite side. They are usually cheap and can be found in a bulk pack, which makes them more common and easier to find.

You probably know someone who has one of these pens on them right now and this makes it such a good, quick impromptu trick.

Your acting skills will come in to play if you want to sell the magic pen trick properly. Look completely surprised that they have their certain type of pen. You want to appear envious that they were lucky enough to have the pen.

When they hand you the pen, handle it like it is precious. Instead of presenting them both sides begin with, YOU admiring all sides of the pen by looking at all the sides. It proves that the pen is not gimmicked and you are able to do it naturally and unspoken. It sounds to say something like, “here, look, the pen is just an everyday pen”

Hold it so the writing on the pen is facing up and then count to three and execute the roll move. A large move acts as a cover for a small move and it appears as if the writing has magically disappeared. This is where you do the paddle move to show that both sides are blank. The writing is gone.

Apologise as if you have accidentally ruined their pen and then begin to count backwards to one. On one, perform the roll move, then wait for your friend to register what has happened and then hand them their pen back.

Quick and Off Handed:

The magic pen trick works well when it is treated as something that is quick and off handed. If you try and make it seem bigger than it is, you are likely to not get the reactions you want. It’s a great magic trick to help build confidence as a performer. The more you perform the more confidence you will gain from it.