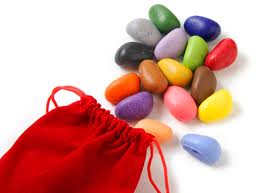 I can tell you right now that the Magic Seeds Wand is a very popular magic trick.

The first time I ever did the magic seeds wand was when I was on the run and I needed to find an almost impromptu magic trick. I was very used to doing the Giant Magic Tree that we learned in the last magic lesson. That was going to be too big for the close up situation I found myself in.

On the spot I made up the ‘Jack and the Beanstalk‘ story you see in this magic trick video. I thought it was going to be awful. To my surprise everybody loved it, kids and adults alike. The more I did it, the better I got at it and it became very popular.

Another reason it became a popular magic trick is that I could teach it to my audience then and there. Most houses, offices … well almost everywhere you can find a few sheets of paper … even just tear some pages from a magazine (as long as it is not a magic magazine). People love learning how to do this magic trick. 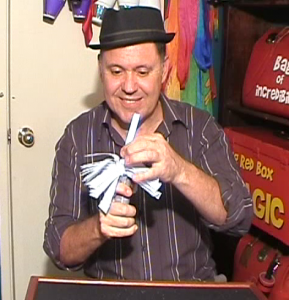 But the strongest reason of all why this, for me, is one of my favourite types of magic trick, is that it is versatile. The same mechanics of the magic trick that we learned in the Giant paper tree is used to create this magic seeds wand. One magic principle we have learned allows us to do both a stage trick for hundreds of people and a close up trick for just one or two people.

So, in review, the magic seeds wand is a fun magic trick that uses nothing more than some sheets of rolled up paper.

You can perform it almost anytime simply because you can almost always find some paper and a bit of sticky tape.

There are no issues with angles. You can be completely surrounded when you perform.

Plus you can give the magic seeds wand away at the end of the trick. Not that anyone would really want to keep it but it is a nice gesture of giving that helps your audience like you a little more. Remember, the more your audience likes you, the more they will like your magic tricks and you as a magician.