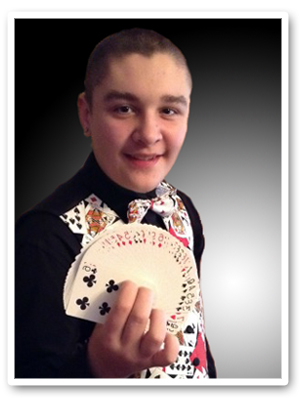 My Name is Jake Allen, I am 16 years old. My interest in magic has been with me from a very early age, I think most young children are fascinated by magic but as they grow older they lose this fascination, but not with me, it just grew and grew.

Drama is also something I am passionate about, for a while everybody thought that this would be the route my life would take, but as my interest in magic grew and grew I realised that magic is the only career path for me. As the years past, every birthday and Christmas I seemed to accumulate more and more magic sets, looking back on it I suppose I must have had every magic set there was and had many duplicate numbers of the same trick.

Every time there was a family or friends of the family party my magic skills were always called upon to provide the entertainment and was always told after each performance that my magic was becoming better and better. They said someday I would be able to make a career from performing my magic.

My first performance in front of a large audience, of roughly six hundred people, was at a local holiday resort in the guest talent show when I was eleven and was told by the resident comedian what a confident performer I was for my age. I have performed there every year since with great comments from the other guests and I am always asked if I could perform more magic for them.

Check out Jake Ace (thats Jake’s magician name) in action in this video. If you want to learn this easy magic trick then check out the vanishing matchbox lesson.

In March 2013 I became an active member of the Anglian Magic Society which meets monthly. This is an opportunity for me to meet other magicians to gain and share experiences. I have found this to be a valuable source of knowledge which has been great help to me.

In the last few months I have been promoting myself and have achieved some success and hopefully I will be able to tell you more about this in the future.