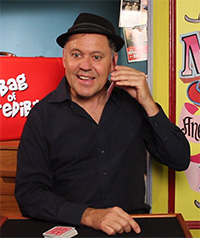 The Missing Card Hotline trick is another really simple way to reveal your chosen card to your audience, with the added bonus of a novel card you can use for FREE. This trick will help you appear to be a master magician who can easily entertain an audience with just some simple tricks.

Misssing Card Hotline is a great magic trick as it involves you essential parading a gaffed card right in front of the audiences eyes as part of the trick. The audience has no idea how you did the magic trick although they are looking directly at the secret to this method.

The main problem a lot of inexperienced magicians face with card gaffs is they are nervous about getting the gaffed card out of the deck without the audience picking up on it. This problem is solved with this simple trick as you can play and remove the gaff in a way that makes sense to the audience.

To do the Missing Card Hotline trick, you will need two extra cards and clear tape. One card needs to have quite a few pips, say a 7, 8, 9 or 10 of any suit, as the pips will act as the buttons of the phone. This is explained in the video tutorial.

The card force is very simple in this trick. If you are able to competently flick through cards, you will be able to successfully perform the Missing Card Hotline.