Firstly, I simply write notes about things that are amusing, quirky or catch my attention in some way. I then put these notes into folders that I then keep. It can be years before I return to these folders to look through them. I was looking through one of these folders recently and I stumbled upon a list of spoonerisms I had been accumulating. 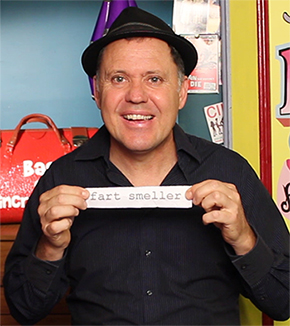 Spoonerisms are words or phrases where letters or syllables are swapped. They commonly appear on accident in a slip of the tongue (or tip of the slung as Spoonerisms are jokingly known.)

This reminded me of the old British comedy series the Two Ronnies where they would present entire skits in the form of spoonerisms. I then found a slip of paper that contained the ‘Smart Feller’ spoonerism. This instantly appealed to my childish sense of humor. I began tearing strips of paper and soon after this comedy torn and restored paper trick was born.

I collect these quirky little things because they can often be perfect as an introduction to a magic trick that is fast and fluid, with no umms and errs. If you add these humorous monologues at the start of a magic trick it creates a barrier for hecklers who want to ruin your trick. If you are saying something that is moderately humorous and you are saying it confidently with a self assured tone, there is little to no gap for trick disrupters to get their word in.

The Spoonerisms I Used:

This is the list I had for a Cack of Pards, sorry, I mean Pack of Cards … there are some other ones that may be a little too rude for this list.

Two of Clubs2♣ Clue of tubs

Five of Clubs5♣ Clive of Fubbs

Two of Hearts 2♥ Who of tarts?

Eight of Hearts 8♥ Hate of Arts

Ten of Hearts 10♥ Hen of tarts

Ace of Spades A♠ Space of aids

Four of Spades 4♠ Spore of fades