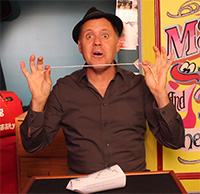 By introducing a bag into the string trick we are able to take the audience’s attention off the string and onto a bag that has nothing to do with the secret of this trick. It’s just simple window dressing for the trick but it does have its own magic as you will see when you try this trick and see how simple it is.

The string used in this simple trick will have to be hunted down, but from my experience, I have found that it is readily available in many countries that I have been to. Unfortunately, it commonly seems to turn up in the last store that you go to. If you do locate the string, be sure to buy enough to last you a while so you are always prepared if you want to perform this string trick.

I explain some great tips in the provided video on how to properly prepare the twine. Be sure to check out the video if you haven’t already.

The idea for the script I used in the video came from an old British TV series hosted by Wayne Dobson. 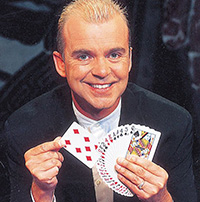 He used Chinese Prayer sticks and he called the short one ping and the long one pong. This stuck with me and I have found another great use for this idea.

Just to touch on the old TV magic series, you may think that they look outdated and aged but you have to remember that the TV companies produced these to make money and appeal to a wide audience. This caused a lot of these magic tricks to be performed in a certain way so that the tricks would be popular to lots of people. Be sure to take notes and see what common themes you can spot in these episodes. There are so many clues and tips about how to be a successful performer waiting for you in this series.