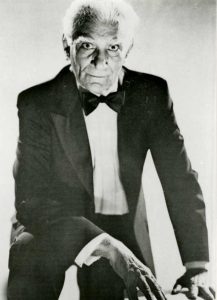 In this week’s History of Magic, we look at the Indian mystic Kuda Bux, one of those rare performers who seem to be able to perform feats that border on the supernatural or impossible, feats that appear to be beyond the normal capabilities of magic as we understand the term. Born Kuda Bukhsh in Aknmur Kashmir, Pakistan on February 17th 1905, Kuda Bux was very different. Although a soft-spoken and humble man, he became famous as “The Man with X–Ray Eyes” who performed a very unique and rarely seen type of magic. Kuda Bux saw his first street magician as a child with his parents and realised that was what he truly wanted to do. He left home at age 13, having been influenced by fakirs and holy men. Throughout his life, Kuda Bux blurred the line between magic and mysticism but never made false or ambiguous claims. Eventually he went on to tour the world with his extraordinary powers that bordered on mind reading and paranormal-like abilities.
END_OF_DOCUMENT_TOKEN_TO_BE_REPLACED