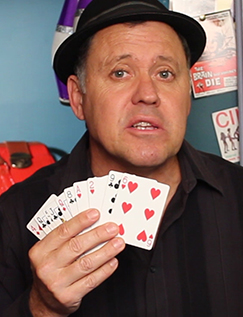 The CSI magic trick is a fun trick that features the Jack of Hearts. The idea for this magic trick came from a book titled ‘Edwin’s Finale’ by Edwin Hooper. He had a trick called ‘Rhyme a Ree’ which was his take on the classic story deck, most widely known as Sam the Bellhop.

I messed around with the concertina deck that Edwin used in his magic trick and I was thinking of other uses for the cards instead of remaining just playing cards. When Edwin held the cards it looked like a detective holding his badge when identifying himself. I then thought the King, Queen and Jack cards could be used as a series of mug shots. My initial idea was to have a card chosen from the deck, and then show a series of the ‘mug shot’ cards while saying “does he look familiar? What about her? What about this one?” ect.