The Magic of Penn and Teller 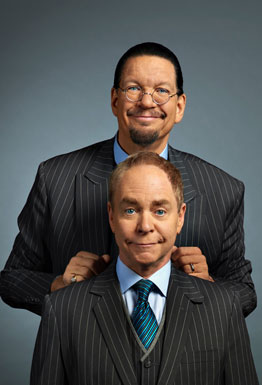 Two of the biggest names in magic today are those of Penn Jillette & Teller, colloquially just known as Penn & Teller who first performed together on August 19th 1975. Today they have their own stage show in Las Vegas and have become well-known for their famous “Fool Us” television series that has captivated millions of viewers worldwide. Penn, Fraser Jillette was born on March 5th 1955 in Massachusetts USA and began his career as a juggler. Raymond Joseph Teller was born on February 14th 1948 in Philadelphia but later changed his name to the ‘mononym’ (single name) of ‘Teller’, by deed poll like pop star Madonna did. While Penn plays the major speaking or oratory role in the duo’s performances, Teller communicates by mime and silent mannerisms. Both highly skilled in numerous disciplines, Penn and Teller are carving a name for themselves in the history of magic as they explore and create new directions in the art of magic. Their innovation and thinking outside the box help keep magic alive.