The Magic of Siegfried and Roy 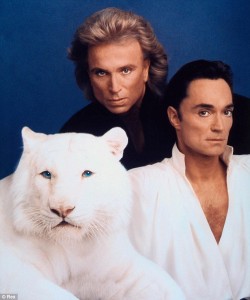 Possibly one of the greatest magic/illusion shows in the entire history of magic was that of Siegfried and Roy who captured the imagination of more than twenty five million people during their incredible career. Siegfried Fishbacher was brought up in Rosenheim Germany while Roy Horn came from Nordeheim. During his youth Siegfried found a 5 Mark bill in his street and bought a magic book that he studied earnestly. Roy Horn spent a lot of his youth at the Bremen Zoo because he was attracted to exotic animals and ended up looking after a 2 year old Cheetah called Chico. Siegfried managed to land a job at the Lago di Garda Resort in 1956 where he began to do small magic shows. Siegfried and Roy met in 1957 while Roy was a waiter and Siegfried was a steward aboard the cruise liner TS Bremen. Roy watched Siegfried perform and they soon established a firm friendship. Siegfried was producing a rabbit from a hat that prompted Roy to smuggle the cheetah Chico aboard the ship and so began their unique, highly successful partnership in magic.