The Magic of Talma 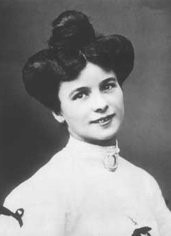 Featured in this week’s History of Magic is Mary Ann Ford aka Talma, born in England in July 1861. Early in her life she became interested in performing in the theatre and worked in a variety of jobs with several stage performers. It was here that she gained experience in theatre and stagecraft. While working as an assistant to a lady mind reader and snake charmer, she met Belgium magician Servais LeRoy. It so happened by coincidence that they were both working at the Royal Aquarium in London that was a popular venue for variety and vaudeville performances. LeRoy was presenting an illusion show and invited young Mary Ann to be an assistant in his act, as he needed another female for his illusion, “The Three Graces”. They worked together for some time where eventually LeRoy charmed Mary Ann and proposed to her. They were married in 1890.