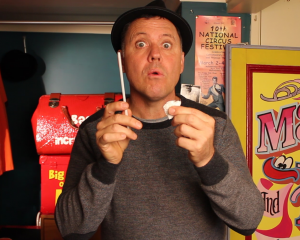 Torn and Restored Sleight of Hand

If you are looking for a fast and simple sleight of hand trick, look no further than the “torn and restored napkin” trick.

Sometimes magic tricks can be negatively affected by over complication. You know the type I mean: Here I have four Queens that I have removed from a deck of playing cards. If we put those Queens in between the two Kings, then give the deck two riffle shuffles and two cuts then I turn the deck upside down and…. The over complicated nature of a magic trick such as this, results in a loss of the trick’s overall strength.

This is not an issue when it comes to the torn and restored napkin trick.

Here’s what the audience sees:

You rip a napkin into pieces, wave a wand (or a similar looking object) over the napkin and the napkin has magically joined back together. It’s a clear and simple magic trick, and as such, both you and the audience will enjoy this trick.

Obviously, you are able to use an array of different types of paper for the trick. Just remember, the thicker the paper, the harder it will be to hide the ball of torn paper.

On your first few attempts you are likely to feel self conscious of the secret ball of paper’s visibility in your hand. Just remember that your audience has not aware of what exactly what you are doing and there is no need to stress too much. To ease the stress, a good method is to rehearse the torn and restored napkin magic trick in front of a mirror. Alternate between doing it with a piece of paper hidden and then try it without the hidden paper. Just as if you were tearing a paper, scrunching it up and reopening it again. Once you have mastered the two versions to the point they 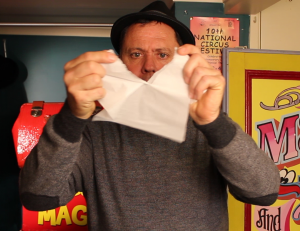 are identical, you will have mastered this easy sleight of hand trick.

Some variations of the torn and restored napkin involve an audience member attempting the trick and failing while you, the magician, succeed and appear to be superior. Try to avoid these versions, as a magic trick that relies on the audience member failing and ridicules the spectators is bad magic. You are able to reverse this and make yourself look bad while making the audience member look good in other versions of the torn and restored napkin trick. Give these versions a try. Those methods are likely to win you more applause and more audience favor. Good Luck with this trick.